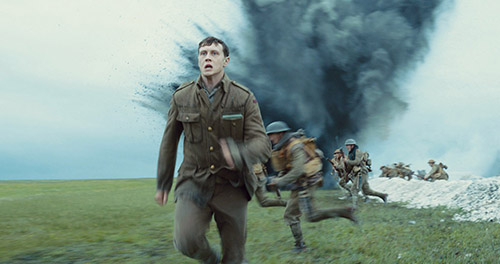 Writer/director Sam Mendes (American Beauty, Skyfall) and co-writer Krysty Wilson-Cairns bring us back to the trenches of World War I with the harrowing journey of two British officers tasked with traversing enemy territory to deliver a message that will save 1,600 of their fellow soldiers from certain death — including one of the young men’s brothers. 1917 is compelling on two different levels, infusing its intrinsically emotional storyline with near-constant cinematic grandeur.

Mendes presents the film as one, single, continuous shot — any edits are cleverly disguised. The effect is one similar to a first-person point-of-view video game where we explore one frightening landscape after another, right there alongside our two heroes. The heroes are played commendably by Dean-Charles Chapman (Game of Thrones‘ Tommen) and George MacKay (Captain Fantastic, The Boys Are Back). Their performances are all the more remarkable when you remember that they’re delivering highly physical and emotional performances in extremely long, carefully staged shots.

The story and performances in 1917 are enough for me. I don’t really need Mendes’ one-take illusion gimmick. Does it make the film feel more immediate, real, or intense? Perhaps. But it also takes me out of the movie from time to time, wondering how on Earth they might have achieved so many photographic feats. That being said, Roger Deakins’ cinematography is breathtaking at times — gliding over still waters, descending into flare-lit ruins, and weaving through busy action scenes. With the help of Deakins and composer Thomas Newman, Mendes achieves a handful of well-timed, highly cinematic moments. Those moments, along with the film’s raw, simple storytelling, are what really set the film apart for me.

With appearances by Colin Firth, Benedict Cumberbatch, and Richard Madden.