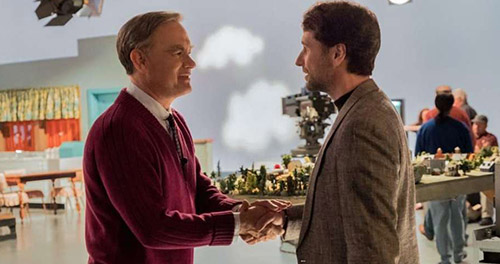 Tom Hanks plays Fred Rogers, the famous host of Mr. Rogers’ Neighborhood, a children’s program that ran on PBS for over thirty years. But this movie isn’t just about Fred Rogers. It’s also the true story of journalist Tom Junod (named Lloyd Vogel in the movie), and the life-affirming friendship he developed while interviewing Rogers for an article.

In the beginning, Vogel (played admirably by Matthew Rhys) is an angry man holding onto a lifetime of resentment towards his father (Chris Cooper). He’s so bent out of shape, that it’s affecting his marriage and his career. When he’s assigned to interview Fred Rogers, he doesn’t take the job seriously. But slowly and surely, Fred Rogers gets under Vogel’s skin. He wins Vogel’s trust and becomes a trusted confidante. Rogers, in sometimes obtuse ways, helps change Vogel’s life and his relationship with his father.

The power of A Beautiful Day in the Neighborhood comes from the contrast in its two central characters. At the start of the journey, you’ll never believe that such a calm, soft-spoken kids’ TV show host could possibly reach the heart and mind of a callous, emotionally damaged, volatile man like Vogel. Or that Vogel would ever let his guard down to let Rogers help him out. But the journey takes us there, in refreshingly unsentimental, honest ways.

From the marketing, I went into this movie expecting a fun, family-oriented dramedy. But under the direction of Marielle Heller (Can You Ever Forgive Me?), it’s really more of a heavy drama about the elusive power of forgiveness. I think it also has a bit to say about our rigid gender paradigm as well.

With a solid supporting performance from Susan Kelechi Watson as Vogel’s wife, and a welcome but brief appearance by Christine Lahti.