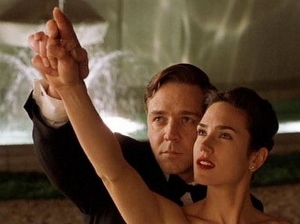 Russell Crowe and Jennifer Connelly are at the top of their game in A Beautiful Mind, Ron Howard’s Oscar-winning biopic about John Nash, the brilliant but haunted mathematician who overcame schizophrenia and received the Nobel Prize. These are the best performances I’ve seen from Crowe and Connelly — their relationship is the glue that holds the film together. The first two-thirds of the movie is an engaging psychological thriller — the less you know about the story, the better it will surprise you. Unfortunately, the film devolves into a sentimental drama in the final thirty minutes, but the pros outweigh the cons overall. In addition to the best picture Oscar, the film also won for directing and adapted screenplay. Crowe was nominated for his performance and Connelly took home the trophy for best supporting actress. With Ed Harris and Christopher Plummer