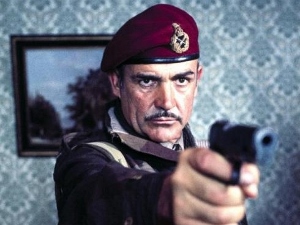 Richard Attenborough (Gandhi, Chaplin) reenacts the elaborate but doomed Operation Market Garden, a World War II strategy the Allied Forces valiantly attempted to execute in order to defeat German Forces in the Netherlands. A Bridge Too Far is a three-hour Cliffs Notes version of a historical event, largely plot-driven, with a lot of cross-cutting storylines being juggled at all times.

The all-star cast get little moments here and there to shine, but no one has an opportunity to steal the show. Sean Connery, Anthony Hopkins, Ryan O’Neal (the weakest link among the roster), and Gene Hackman stick out above most of the other names. Their characters are charged with capturing a number of bridges and waiting for further orders while holding their ground. Problem is, the radios go silent and the Germans draw near. The final hour of the film sees Connery and Hopkins’ characters under siege in different locations. One man’s group escapes capture while the other doesn’t.

James Caan is perhaps the most memorable, playing a soldier who risks his life to retrieve a near-dead comrade from the battlefield. Robert Redford makes a flashy appearance late in the film, leading a group of rowboats across a river into heavy gunfire — a death wish of an errand. Laurence Olivier plays a doctor who pleads with the Germans to implement a ceasefire so that he can attend the sick and dying.

A Bridge Too Far was hard to get into for the first hour. You don’t get to spend much time with any character before the film whisks you off to another location and another character. By the final hour, I was moderately engaged, but it’s one of those movies where the pieces are greater than the whole. In addition to some of the character moments mentioned above, the film also features a healthy dose of cinematic action. There’s a lot of battleground bombardment, complete with army tanks and low-flying aircraft. There’s also a famous parachuting sequence that provides some direct point-of-view shots while jumping out of the plane. The whole affair is miscored by John Addison, who focuses on the pomp of war instead of the tragedy or peril — I just don’t think warfare is something to treat so preciously.