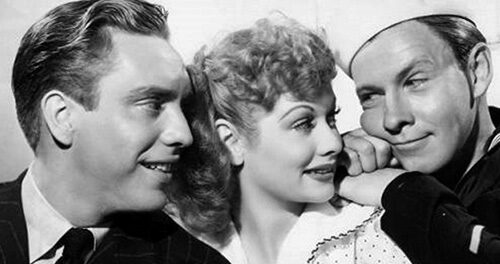 Lucille Ball stars in this high-spirited comedy about a love triangle between her character, a happy-go-lucky sailor (George Murphy), and a buttoned-down business executive (Edmond O’Brien). Ball’s engaged to Murphy, and O’Brien is engaged to someone else as well, but as Ball and Murphy welcome O’Brien into their social circle, he and Ball begin to fall for one another.

This is a very sweet little movie with characters that won me over within the first half-hour. The great thing about A Girl, a Guy, and a Gob is that Ball, Murphy, and O’Brien aren’t petty or jealous characters. They each genuinely want the best for each other. So the movie maintains it’s high energy and good cheer, and makes you care about all three characters. I found myself wishing Ball could end up with both men!

All three leads give terrific performances. Murphy is a scene stealer with his bright eyes and wide grin, while O’Brien’s quiet, unassuming demeanor quickly becomes endearing in its own way. The supporting cast are a bunch of broadly-drawn but fun caricatures, including George Cleveland as Ball’s boisterous father and Henry Travers as a mutual friend of the group who conspires behind the scenes to make the right pairing happen.

Comic highlights include a money-making scheme in which Murphy takes bets from a crowd about whether or not a fellow sailor can grow four inches on command, and the fate of a baby grand piano Murphy tries to pawn for wedding ring money.