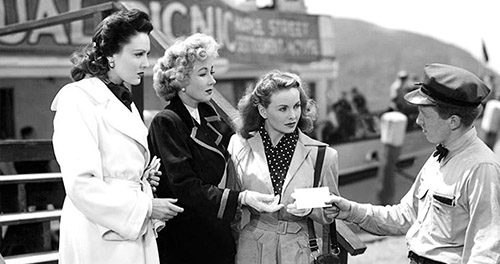 Writer/director Joseph L. Mankiewicz (All About Eve, The Ghost and Mrs. Muir) won his first two Academy Awards for writing and directing this drama about three wives who reflect on their marriages when they learn a fourth woman has just left town with one of their husbands. Mankiewicz can always be relied upon for great dialogue and pitch-perfect casting. All six principles (the fourth woman is never seen) get their moments to shine, with Linda Darnell leaving the biggest impression as a tough confident woman who has trouble confessing her feelings.

There’s a lot to appreciate about the script. Beyond the smart dialogue and clever concept of the fourth, unseen woman narrating the film, Mankiewicz also weaves subtext of self-discovery through the film, with each of the three leading women confronting their own insecurities while facing the fear of marital abandonment. And for a film that begins with the presentation of a central mystery, Mankiewicz doesn’t disappoint when that mystery is solved. The set-up and resolution are my favorite parts of the film, and the actors all do a great job in-between, but the structural gimmick of exploring each of the three marriages in three long flashbacks stymie momentum and keep me from fully falling in love with A Letter to Three Wives.