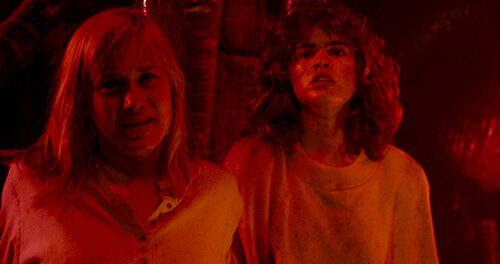 After taking an interesting turn for the worse with their first sequel, New Line Cinema corrects course with a third Freddy movie that’s just as good as the original film. Original star Heather Langenkamp returns as a psychologist that specializes in dreams, hired on at a hospital where suicidal teens are being terrorized by Freddy. When the kids begin dying, Langenkamp helps a new patient (Patricia Arquette) use her ability to pull people into her dreams so that the kids can all gather and fight Freddy together – as the ‘dream warriors’.

With a script co-authored in part by Wes Craven and Frank Darabont, and under the direction of Chuck Russell (The Blob, Eraser), Dream Warriors is the best-cast and most stylish of the first three Freddy films. I love the idea of at-risk kids banding together to fight a common foe. The young cast are all competent and engaging in their roles, including Rodney Eastman as a mute who learns the power of his own voice and Jennifer Rubin as a former druggie working admirably to turn her life around. Future Oscar-winner Arquette (Boyhood, True Romance) already shows indelible charm in her big screen debut. And of course, Robert Englund is great as always in the role of Freddy, embracing the grand guignol quality of the piece and taking the role into darkly comic territory.

The special makeup and visual effects are several notches above what we saw in the previous two installments. Highlights include a sequence in which Freddy marionettes one of the kids by pulling veins and tendons out of the boy’s wrists and feet, and a fight between returning co-star John Saxon and a stop-motion animated skeleton. The film also helps expand the series’ mythology by revealing more backstory about Freddy — most notably that he was the product of a nun’s gang rape at an insane asylum, giving him a new title that would stick throughout the franchise — “the son of a hundred maniacs.”

With Priscilla Pointer and Laurence Fishburne.