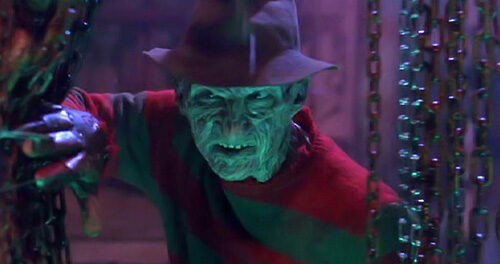 Freddy Krueger (Robert Englund) returns for more murderous mayhem in this entry directed by Renny Harlin (Die Hard 2, The Long Kiss Goodnight). First, he dispatches of the three remaining characters from The Dream Warriors, including returning character Kristen (Tuesday Knight, played by Patricia Arquette in the last film). But before Kristen dies, she passes on her supernatural gifts to a new girl, Alice (Lisa Wilcox). Unfortunately, Alice can’t really control the ability to bring other people into her dreams, so she unwittingly becomes Freddy’s personal waiter, serving up friend after friend to the child molesting burn victim. To free her friends’ souls from Freddy’s eternal torment, she acquires the best traits from all of them and goes head to head with the maniac.

The Dream Master features a lot of imagination and is the most aggressively stylistic of all the Nightmare films. Visceral highlights include one victim’s transformation into a cockroach Freddy crushes inside a ‘cockroach motel’, and another death scene in which Freddy locks lips with an asthmatic and literally sucks the life out of her. Performances are a bit weaker overall (often hindered by what appears to be less-than-stellar dubbing), except for Robert Englund, who has really fallen deep into his role by this point. Some bemoan his campy one-liners and the increasing comedy in the series — I actually think it helps keep the series fresh.

If you’re looking for logic in the storyline, call off your search before it even begins. Freddy is resurrected by fiery dog piss and is defeated just as arbitrarily. But if you’re electing to see Freddy Krueger kill again, you should also be willing to suspend your disbelief that a supernatural bad guy can ever really be killed to be begin with.