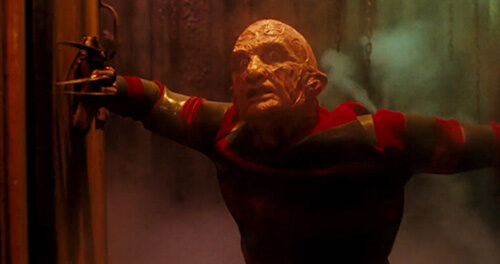 Freddy’s franchise continues with this installment directed by Stephen Hopkins (The Ghost and the Darkness, Predator 2). Alice (returning player Lisa Wilcox) is pregnant, and Freddy (Robert Englund) finds a way to kill again through her unborn baby’s dreams. To stop him this time, Alice and her dwindling number of friends must free the spirit of Freddy’s birth mother so she can help put some supernatural smack-down on him.

For a series in its fifth entry, The Dream Child does commendably well offering up more of the inventive mayhem audiences want to see, while also adding to the mythos. I like the backstory of Freddy’s conception and the depiction of his mother (Beatrice Boepple), a nun at an insane asylum, being ravaged by a hundred maniacs. It’s hard for these films to keep coming up with new ways of defeating Freddy, but when your own mama wants to drag your ass into the grave with her, that’s pretty compelling drama for a horror movie. Memorable kills involve Alice’s boyfriend (Danny Hassel) merging with a motorcycle in something reminiscent of a David Cronenberg movie, and a comic book nerd’s black & white, two-dimensional demise.