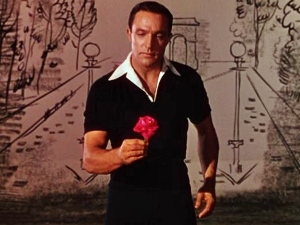 Near the end of both Singin’ in the Rain and An American in Paris, there is a big, epic dance number that feels very out of place. It’s the only thing I don’t like about Singin’ in the Rain, and the only thing I DO like about An American in Paris. The later film is essentially a superb 20-minute dance number tacked onto an otherwise shitty movie about a guy who picks the wrong girl. Early in the film, Gene Kelly’s painter character is introduced to a wealthy fine arts connoisseur played by Nina Foch. Foch takes Kelly to lunch and the bastard spends the meal staring slack-jawed across the room at Leslie Caron. He doesn’t know Caron’s character at all, and he’s already in love with her. I hated him from that point forward. I mean, how fucking rude is it to ignore this nice Foch woman who appreciates your art for some chick twenty years younger than you that you don’t even know? Hated him, hated Caron, hated the movie at that point. I wanted Foch’s character to purchase some iron and go medieval on their asses.

What sucks further is the fact that until the great 20-minute dance number at the end, all the musical numbers suck. You get Kelly singing to children on the street, dancing with dudes back and forth on the sidewalk, and some other lame-ass shit. Every single number brings the story to a screeching halt and does nothing to further your interest in the movie or its characters.

So my recommendation is this: Skip to the last 20 minutes and watch the amazing dance number. It features Kelly stepping into an impressionistic version of Paris and it features great choreography, costumes, and sweeping camera movements. It’s the only cinematic, redeeming quality about this turd.

Unfortunately, director Vincente Minnelli would return to the Parisian setting with Leslie Caron a few years later for an even more waterlogged turd called Gigi.

The only good part of the movie.