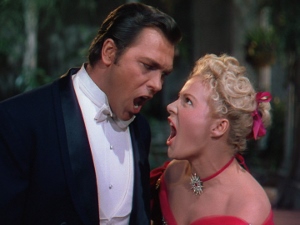 This movie version of Irving Berlin’s musical is chintzy fun kept afloat by cartoonish performances from leads Betty Hutton and Howard Keel. Watching the movie at this end of the feminist movement can be frustrating. While Annie Oakley is presented as a strong, brutish character, she ultimately stifles herself to win the love of Frank Butler (Keel). The film is also considered racist for its stereotypical depiction of Native Americans. The staging of the musical numbers isn’t particularly inspired, but some of the songs are good enough on their own, including the iconic number, “No Business Like Show Business”. The highlight of the film, at least for me, is Annie and Frank’s dueling duet of “Anything You Can Do, I Can Do Better”.