Another passable Marvel movie. Let’s see. What was this one about. Shit. I saw about a week ago… I remember Paul Rudd and the new girl (Evangeline Lilly) spend most of the movie trying to get back Michael Douglas’ super cool high-tech laboratory. And it’s hard, because it can shrink just like Paul Rudd can, and be carried around like a toy. How it has any plumbing, I do not know. How everything inside the place doesn’t get knocked over from being carried around in people’s pockets, I do not know. In fact, you better not think about actual logic or science when watching this Ant-Man movie — it takes hella liberty.

So back to the movie. There’s a bad guy — well, girl, actually — who can fade in and out of reality or something. Michelle Pfeiffer’s wedged in the story as Evangeline Lilly’s mom and Michael Douglas’ wife. They thought she was dead, but really she’s just trapped in the microcosmos. Like when you get so little that you get lost between atoms and shit. So they really want to find her, so they can be a family again. Oh, Evangeline plays the Wasp character. She’s like Ant-Man but with wings. Paul Rudd and her kinda have thing. Of course. So anyway, Michael Douglas and Evangeline Lilly want to find Michelle Pfeiffer, but the shifty lady and some other bad guys keep stealing the laboratory. Or something.

Look, with rare exceptions these movies are the same goddamned story over and over again. This is all you’re gonna get from me unless it truly steps out of the box and makes an impression. I enjoyed Ant-Man and the Wasp enough. Paul Rudd’s cute, the special effects were kinda cool, especially when Paul Rudd gets really big. Cuz more Paul Rudd is always a good thing. Plus, when Paul Rudd got really big and Evangeline Lilly was normal sized, I started having dirty imaginations about what they could do together. But that’s not really the movie’s doing so much as what I personally bring to the movie. You know, my personal baggage. But when you’re watching the same movie over and over again, you gotta latch onto something. So I latched onto the gutter. 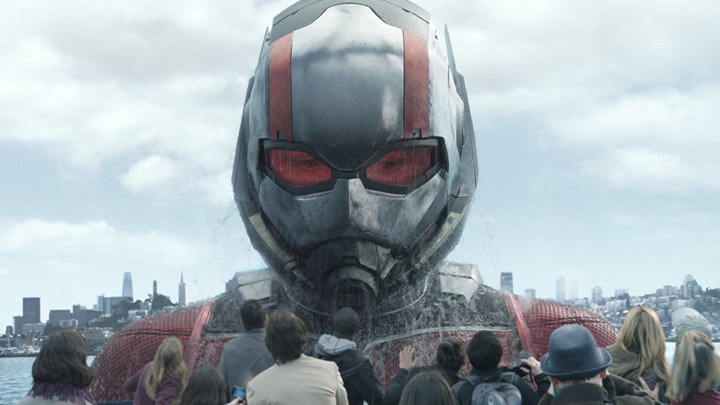