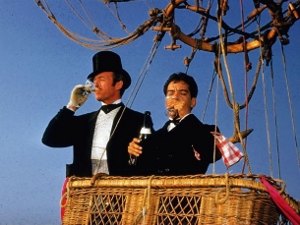 Around the World in 80 Days is a three-hour-long, episodic adventure that’s high on spectacle and low on story or character. I wager it played better to a 1950s audience interested in seeing a cliche-ridden “It’s a Small World”-like pastiche of world cultures. I wish leading actor David Niven had more to do in his role — it could have really helped the film a lot if he were more interesting or charismatic. His right-hand man, played by Mexican entertainment sensation Cantinflas, is marginally more interesting. They team up with Shirley MacLaine’s Indian Princess character, but she’s not very interesting, either. Without interesting characters, the episodic nature of the movie gets tedious. Each country Niven and Cantinflas visit is its own little short film. They fight the bulls in Spain, rescue MacLaine from the Thuggee cult in India, fight Native Americans on a train through the great American West… and so on. The film is littered with cameo appearances in a desperate attempt to keep you amused — but none of them leave much of an impression. Peter Lorre, John Carradine, Buster Keaton, Marlene Dietrich, and Frank Sinatra are among the roster. Somehow, the film beat out all four superior competitors (Friendly Persuasion, Giant, The King and I, and The Ten Commandments) for Best Picture at the Oscars that year.