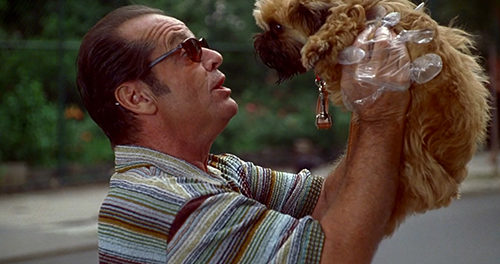 A curmudgeonly obsessive-compulsive (Jack Nicholson) falls for a charming waitress (Helen Hunt) and strikes up an unlikely friendship with a gay neighbor (Greg Kinnear) in As Good as It Gets, another comedy/drama hybrid from the sometimes brilliant mind of James L. Brooks (Terms of Endearment, Broadcast News). In lesser hands, this one could have turned out a tonal mess, but Brooks and the cast work overtime to make the laughter and tears coincide believably.

Nicholson and Hunt are charismatic as hell here. The camera loves their faces, and Brooks lingers on their quizzical or pained expressions longer than most other directors would dare. It’s in those prolonged closeups where we get to stare into their eyes and transplant ourselves into their loafers. Take notes, kids — this is how Oscars are won. Kinnear is suitably sweet in a role that is thankfully more than a stereotypical gay character. Cuba Gooding, Jr. pops up in a few scenes bringing some of his Jerry Maguire energy to the proceedings. And everyone in this fine cast is nearly upstaged by a little dog named Verdell (Jill the Dog). Verdell belongs to Kinnear’s character and Nicholson is reluctantly forced to care for the pooch after Kinnear is brutally beaten up and hospitalized. The scenes in which Nicholson and the dog bond are some of the more magical ones in the film.

Given all the obstacles these characters have and how disparate their personalities are, As Good as It Gets works more organically than it has any right to. I could quibble about a road trip that never quite feels justified. I’m also not sure the love relationship between Hunt and Nicholson would work outside the confines of the film, and I’d be lying if I said their age difference didn’t give me pause. But as I’ve indicated already — these actors are so on top of their game, it doesn’t really matter.