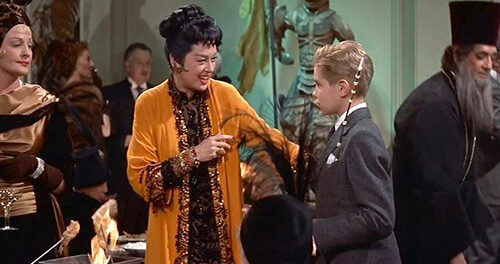 A young boy is orphaned and left in the care of his only living relative, an eccentric aunt who defies convention and encourages discovery. The pair endure challenge after challenge in an episodic narrative that ends in the boy becoming a man and getting married, a decision that threatens to finally tear them apart.

It’s so rare for me to fall this much in love with a movie so heavily chaptered. Normally, the different story sections are uneven and you lose the thread of the overarching narrative. But not so with Auntie Mame. I do especially favor the first chapter of the movie, when Mame meets young Patrick and introduces him to her extravagant party world. But no less entertaining are the chapters about the stock market crash pushing Mame into the work force (with tragically comic results), or her courtship of a southern aristocrat whose family forces her to ride side saddle in a fox hunt. The final chapter gets a little more serious than the others, when Mame disagrees with Patrick’s choice of fiancee. But it’s all out of love and concern for the boy, and Mame’s instincts turn out to be right — resulting in one final comic set piece.

The script, based on a novel, is by Betty Comden and Adolph Green, who worked magic in the similarly structured Singin’ in the Rain. I don’t know how Comden and Green make these two films work as well as they do. The pervasive irreverence should negate any attempt to cash in on dramatic moments, and the broken-up vignette fashion of storytelling should surely test our attention span — but both films are utterly charming.

In Auntie Mame, I think the glue that holds it all together is most certainly Rosalind Russell. Russell commands the screen, larger than life and full of possibility, as seen through the eyes of a child. She’s witty, dazzling, and endlessly amusing — without ever getting annoying (another miracle of the film). No one else in the cast can rival her in any way, though Peggy Cass is memorable as a nervous unmarried pregnant woman Mame takes care of.

Auntie Mame is a supremely colorful film, beginning with a montage of kaleidoscope imagery and containing opulent production and costume designs. Bronislau Kaper’s score is unabashedly romantic. It’s a decadent film in many ways, possibly too rich for some, or too silly for others. To be honest, I’m still trying to figure out why it resonates with me as deeply as it does. Is it Mame’s optimistic philosophies? Is it wish fulfillment to see the world and live so well? I’m not sure I’ll ever know. But in these dark times of two-tone movies hell-bent on dreary realism, Auntie Mame is a retro breath of fresh air. I love her to pieces.