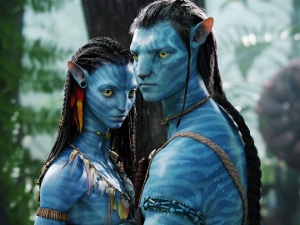 James Cameron’s first film since Titanic is a supreme juvenile fantasy with a healthy sense of adventure and discovery. From its floating mountains to its bio-luminescent flora and fauna, the world of Pandora never stops unfolding before our eyes, and it’s a beautiful, trippy little place to visit. The core concept of Avatar — that of experiencing life through a separate host body — is intriguing, but the story is otherwise pedestrian fare (think Dances with Wolves with a side of Dune). Even if you’re okay with a well-traveled tale, Cameron’s screenplay is surprisingly sophomoric, lacking any grace in its unwieldy exposition, or any depth to most of its characters. The weakest links are the villains, played by Stephen Lang and Giovanni Ribisi, whose jobs are as thankless as Billy Zane’s in Titanic.

Zoe Saldana’s character, however, is glorious to behold. She plays one of the Na’vi, big blue sexy tree-hugging aliens. Saldana gives a raw, primal performance that goes a long way keeping you engaged with the movie. She’s cool. She rocks. She makes you care about her, her people, and her home. It’s not in the writing, sad to say — it’s in Saldana’s performance. And it’s in the eyes. The Na’vi are computer-generated characters, but their facial expressions are the result of Cameron’s innovative “emotion-capture” technology, which faithfully translates a flesh & bone actor’s performance onto the visage of their CG counterpart. It’s a breakthrough in the evolution of CG characters, handily slaying the “dead eye” phenomenon that has plagued Robert Zemeckis’ CG work.

Avatar is being released in a cloud of hype, with words like “game changer” and “masterpiece” being thrown around, even drawing comparisons to the original King Kong and Star Wars. Unfortunately, it lacks the originality and emotional impact to deliver on those expectations. But it’s still good, solid popcorn fun.