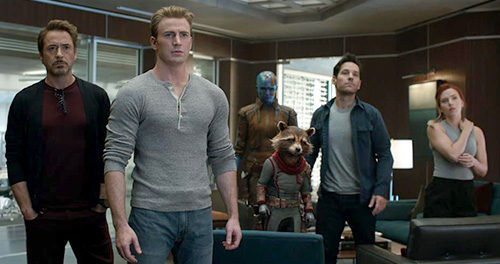 Marvel Studios chief Kevin Feige and writer/directors Joe and Anthony Russo hit a home run that should satisfy all Marvel fans with Avengers: Endgame, the climactic finale to what is essentially an 11-year story arc. It begins with the Avengers — Captain America (Chris Evans), Iron Man (Robert Downey Jr.), Black Widow (Scarlett Johansson), the Hulk (Mark Ruffalo), and Thor (Chris Hemsworth) — all reeling from the catastrophic events of the last movie, which saw the biggest and baddest villain of them all, a big purple dude named Thanos (Josh Brolin), use a collection of magic stones to snap his fingers and instantly kill half of all living creatures on Earth. Among the dead were Spider-man, Black Panther, Nick Fury, and probably countless soccer moms.

Naturally, the Avengers want to find a way to reverse the damage. And when Ant Man (Paul Rudd) returns from the quantum something-or-another dimension, he has a theory about how to do it. Iron Man does the math and the team decides it’s worth the risk. So then there’s time travel. Convenient? Sure. But at least the Russo brothers make it fun and tongue-in-cheek, with lots of references to Back to the Future. But enough about the plot.

Avengers: Endgame is a long movie (three hours and change) and almost feels like it would have been better as an HBO mini-series event. But if you can control your bladder and keep your butt from going numb, the movie moves along briskly for the most part. It also maintains a welcome sense of humor, despite the dire circumstances. My opening night audience laughed as much as they cried. And, yes, be they tears of sadness or tears of joy, you will get wet on this ride.

I also have to point out that there is an all-out superhero free-for-all in this movie that blows any other action moment in any other Marvel movie completely out of the water. I mean, if you’re a superhero fan, you will shit, piss, and cream your pants all at once when this happens. And while we’re at it, let’s hear it for the girls — all the Marvel super women get a special moment to shine in solidarity, and it’s a beautiful thing to witness.

With Brie Larson, Gwyneth Paltrow, Jeremy Renner, Don Cheadle, Michael Douglas, Robert Redford, Rene Russo, Michelle Pfeiffer, and pretty much anyone who has ever appeared in any Marvel movie.