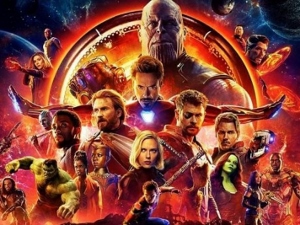 I’ve been hard on Marvel movies for being cookie-cutter and devoid of surprises, but Avengers: Infinity War stops that trend dead in its tracks. Directors Anthony and Joe Russo (Captain America: The Winter Soldier and Civil War) are downright masterful at keeping Infinity War going strong from beginning to end, with never a dull moment, all the action you’d expect, far more laughs than you might expect, and a heartwarming amount of intimate and dramatic character interaction that really sends the movie over the top.

That said… the story’s not any more interesting or original than it ever is. Sorry, but it’s not. There’s a big space bad guy — he’s an utterly ridiculous-looking purple doofus called Thanos this time — and he’s going to destroy the world and kill everybody. Marvel tries to give Thanos depth and emotional weight, but I couldn’t get past how stupid he looked to even try caring about that shit. At one point, Starlord (Chris Pratt) says exactly what I’m thinking by pointing out Thanos’ scrotum-like chin. Anyway, I didn’t appreciate Thanos at all. They needed to make him look more human for non-comic-book fans to take him seriously. And if Josh Brolin’s giving a performance of any kind beneath all that purple nonsense, I couldn’t tell.

Despite the villain looking stupid, the difference here is that the stakes are higher. If the big purple doofus collects all the infinity stones and bedazzles his gauntlet with them, he’ll be able to instantly kill half the world’s population — with the snap of his fingers. Don’t ask me why. They explain it in a flashback, but it doesn’t make any sense to me. Think of him as a do-gooder Jehovah’s Witness who drank the Kool-Aid, I guess. Normally, I’d shrug off a threat of this Thanos/infinity stone magnitude, thinking, ‘They won’t kill half the world, and they won’t kill any big money-making characters, either.’ But Marvel means business and people really do die in Infinity War — characters you’ve grown to love over the course of the last ten years leading up to this big cinematic event. Now, the Marvel universe is magical, and I’m absolutely confident some of the deceased won’t remain dead, but some of them will — and more of them might die in next summer’s conclusion (it’s hard to imagine that they won’t, actually). To say more would be too spoilery, so new paragraph.

Infinity War is one of the two most entertaining Marvel movies so far, along with the first Guardians of the Galaxy. Most people are going to talk about and remember a few of the dramatic highlights, but what sealed the deal for me was the movie’s tremendous humor and array of intimate character moments. At one point the action stops for a god and a racoon (Thor and Rocket) to come-to-Jesus and cry a little. That’s a beautiful thing! It’s one of few Marvel movies where I didn’t at some point look over at the wall and think about my grocery list. Infinity War moves. It has feeling. It has action. It has laughs. It has tears. It truly kinda has it all. But the movie’s greatest achievement is in taking the big, apocalyptic superhero movie — which has been done many times already — and giving it a fresh perspective. It’s not about visceral collateral damage this time. In fact, you see hardly any helpless civilians in this movie. Infinity War places you strictly into the superheroes’ points-of-view.

It’s all about character. What Marvel does best.

Unless it’s the villain.