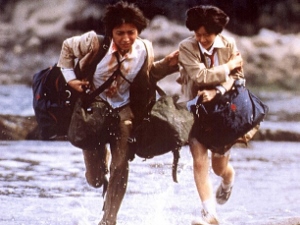 In a not-too-distant future Japan, the government cracks down on adolescent shenanigans by randomly selecting one 9th grade class per year to duke it out on a remote island until only one student is standing. Battle Royale starts off with a good dose of operatic, dark humor, but as the teenage body count rises, you actually get to know many of the embattled kids (often in flashbacks immediately preceding their demises). Despite its hokey premise, the movie packs a moderate emotional punch — and that’s what I hooked onto. The man in charge of the deadly war games (Takeshi Kitano) is also an interesting character, capable of sudden menace or startling empathy. Beautiful location photography and a bombastic score add to the visceral potency. Battle Royale is fresh and (I’ll dare say) hip, predating The Hunger Games by several years.

It’s all the more amazing to learn Kinji Fukasaku was 70 years old when he directed it. When he learned he had prostate cancer at the age of 72, his doctors urged bed rest, but instead he went immediately to work directing Battle Royale II. He died during production and his son finished the task. Battle Royale ends with a closing bit of advice that has even greater meaning because of Fukasaku’s example: “No matter how far, run for all you’re worth. RUN.”