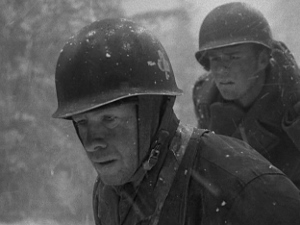 Van Johnson and Ricardo Montalban are among the men holed up under snow and fog in William Wellman’s (Wings) depiction of the Battle of the Bulge. Unlike most other war films of the time, Battleground is more of a character study than an action film, tracing the remarkable spirit of the men who endured the long siege. The acting is good all around, and Wellman directs the subject matter without gratuity or exploitation. Battleground was one of the first non-propaganda war films, and earned Oscar nominations for best picture and director.  It won for its screenplay and black & white cinematography.