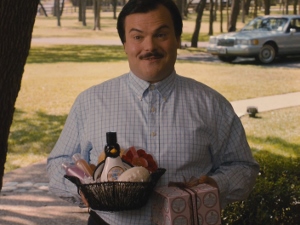 Jack Black stars in this quirky comedy about a beloved Texan mortician who begins a relationship with one of the town’s wealthiest widows and becomes prime suspect in her murder. Writer/director Richard Linklater (Boyhood, Dazed and Confused) adapts from a true story and involves several real-life townspeople as supporting players in the cast. The documentary style of the film fits the story very well, and supporting players Matthew McConaughey and Shirley MacLaine further elevate the material. Black stretches his acting wings here, playing a character that could be interpreted as genuinely sweet and humanitarian, or calculating and self-serving. Even though he ends up charged with murder, it’s interesting to see how the town rallies behind Bernie prior to the big trial.