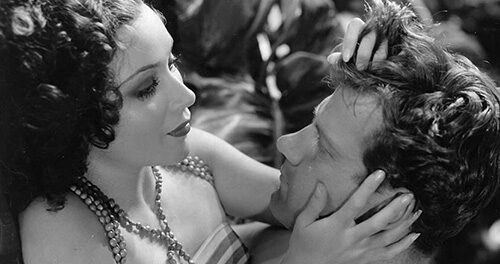 A tropical island native woman falls in love with a visiting white man, even though she’s destined for marriage to an island prince. The two lovers flee and begin a new life together, but the native mob soon catch up with them and demand they be sacrificed in a volcano to appease their angry god. Joel McCrea (The Most Dangerous Game) and Dolores del Rio play the doomed lovers. Their whirlwind romance is made more palatable with the two speaking different languages, relying on pantomime and raw lust more than burdensome dialogue. It helps that they both look good in makeshift swimsuits, too.

Bird of Paradise is a somewhat cheeky matinee movie, complete with a shark attack, underwater courtship scene, and native dancing choreographed by an uncredited Busby Berkeley. But there’s something disarming about McCrea’s and Del Rio’s performances at times, and I enjoyed the escapist value of the movie — especially when the lovers find a remote location to build a home together. The third act is pleasantly unpredictable, even a little moody and scary at times (unintentionally hilarious at others, like when the natives respond to their first encounter with gunfire). The ending isn’t a completely happy one, but if it darker, the film might leave a more lasting impact.

Directed by King Vidor, produced by David O. Selznick, music by Max Steiner (one of the earliest films to feature music throughout).