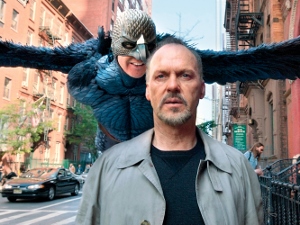 Birdman swoops into cineplexes offering the antidote to superhero hysteria, CGI migraines, and Hollywood’s usual hackneyed, formulaic bullshit. It’s goddamned original, a showcase for skill and craft, and a breath of fresh fucking air. Michael Keaton turns in a career-best performance as a one-time popular film actor who is risking it all to put on a Broadway play. In the span of hours leading up to opening night, he’s besieged by family problems from his ex-wife and daughter, threatened with bad reviews by New York’s critical elite, and undermined by his volatile, unpredictable leading man. And all of this is happening while he’s continually haunted by the voice of the superhero character for which he became famous playing — Birdman. The casting of Keaton is truly kismet, with all the obvious shades of Keaton’s Batman performance coming into play. If there’s any justice in Hollywood, Keaton will be sleeping with an Oscar soon. Edward Norton and Emma Stone are also stand-outs as the crazy leading man and daughter. Zack Galifianakis and Naomi Watts put in great performances, too, and Lindsay Duncan is deliciously evil as the critic determined to eviscerate Keaton for his efforts.

Writer/director Alejandro González Iñárritu (Babel, 21 Grams, Amores Perros) maintains tension by letting the entire film play out in one, seemingly never-ending shot. The jazz/improvisational drum score lends further immediacy and realism to the execution. And when Iñárritu opens up this claustrophobic film to incorporate fantasy and absurdity in the final act, Birdman really takes flight. I’ve never seen anything like it before — and that counts for a hell of a lot these days.