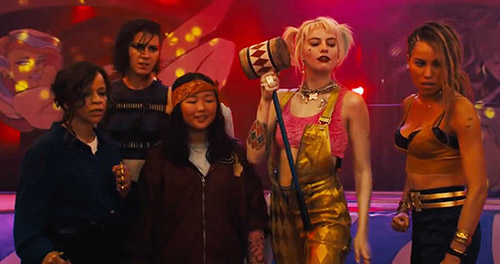 After being part of an ensemble in The Suicide Squad, Margot Robbie returns in the role of Harley Quinn — a character that really isn’t built to carry her own movie. She’s a former psychiatrist who fell in love with the Joker and turned to the dark side. In other words, she’s nuts and dangerous. She can only function as a funny, charismatic villain, but Birds of Prey tries to turn her into a sympathetic hero of sorts, trying to make us empathize with her in the wake of her breakup from the Joker. Trouble is, I don’t give a shit.

Thirty or forty minutes into Birds of Prey, I still didn’t give a shit. I love Robbie as an actor, but the most I could ever hope to relate with her is in her tremendous love for a great egg sandwich. It doesn’t help that the first half of the movie is bogged down in heavy plotting and exposition, told in a back-and-forth non-linear fashion that almost gave me whiplash. The movie is much more entertaining in its second half. The heart of the movie — which should have been played up more — is Harley’s relationship with a little street girl (Ella Jay Basco) she takes under her wing. The two get embroiled with a generic bad guy (played somewhat unconvincingly by Ewan McGregor) and end up teaming with three other vigilante women to defeat him. They call themselves the ‘Birds of Prey’, proving Warner Bros. and DC learned nothing from their Justice League fiasco and are still all-too-willing to launch new superhero ensemble projects before any of the characters have been firmly established.

Birds of Prey is a muddled, mixed bag. It takes a while to find its stride, but it has its moments. If you decide to see it, I am confident that you will — at the very least — be mightily impressed with Margot Robbie’s physical performance and several prolonged and impressive pieces of fight choreography and stunt work. With Rosie Perez.