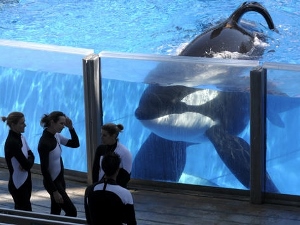 This documentary focuses on the negative impact of keeping Orca whales in captivity for amusement park entertainment. It specifically focuses on the story of a whale named Tilicum and how he came to be a breeder and performer at Sea World in Orlando, Florida. The primary interview subjects are former Sea World trainers, who talk about breaking up family units, withholding food from the animals as a coaching tactic, and the long period of time during which the animals would be kept in dark, small spaces. Tilicum had it especially bad, because Orca whales are a matriarchal species, and whenever he would be confined with two female whales without food, they would punish him nightly with scratches and bite marks. You come away from Blackfish under the impression that Tilicum was getting abused on all fronts, making it easy to see how such an animal might react violently from time to time.

Blackfish argues that Orca whales are highly social and emotional creatures. There’s heart-breaking footage of the whales reacting in the wild to members of their family being captured, as well as footage of mother whales reacting to having their babies taken away from them in captivity. Captivity and cruel treatment is what leads the animals to attack and sometimes kill their trainers (there are no recorded attacks by killer whales in the wild). Several stories introduce us to the lives lost from captive whale attacks, the central one being the death of Sea World trainer Dawn Brancheau, who was violently killed by Tilicum in February, 2010. And this wasn’t the first time Tilicum killed someone — it was the third.

As upsetting as the documentary is, it’s great news to know that the filmmakers may have helped change things for the better. In early 2016, Sea World announced that they were no longer engaged with captive breeding of the animals, and that they would phase out their theatrical whale performance shows by 2019. The park still accepts no responsibility for the deaths and injuries of any of its trainers, insisting they are all the result of ‘trainer error’ or accidents.

Bottom line: When you see how Sea World treats their whales and their trainers, it makes you never want to visit Sea World.

Tilicum is still at Sea World, reportedly in declining health.