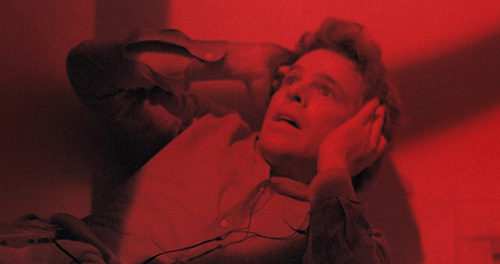 Joseph Bottoms (The Black Hole) stars as a blind man who receives experimental surgery allowing him to ‘see’ sonar images with help from a device. As he’s getting used to being blind and using the new machine, a taxicab-driving serial killer is on the prowl, picking up young women and cutting them open with a surgical knife while they’re still alive. Eventually, the blind man learns who the killer’s next victim will be and tries to save her.

Blind Date is really two different movies for most of its run-time, and the two have absolutely nothing to do with one another. Director Nico Mastorakis treats the killer’s scenes like an old school Italian giallo film, where we never see the killer’s face and are privy to a lot of ‘point of view’ angles. While the film isn’t at all bloody, the killer’s scenes are the better scenes in the movie. Joseph Bottoms does an okay job as the blind man, and the camera clearly loves his face (he’s in closeup most of the time), but his character just isn’t very interesting. In fact, there’s something even a little disturbing about the man in the way he obsesses over the woman he eventually tries to save. I mean, he breaks into her house at night. And watches her sleep. If the movie had explored the similarities between the hero and the villain, that would have taken things to another level.

As a middling thriller, Blind Date has its moments. One is when Bottoms walks out in front of a neon billboard and can’t tell that he’s on the edge of a deadly drop. The other is the climactic showdown in a darkened indoor pool. Mastorakis makes both scenes memorable with clever imagery and editing. I also enjoyed the synth score throughout the movie.

Fleeting moments of toplessness are probably what this movie is most well-known for. Fans of the female breast will enjoy seeing co-stars Kirstie Alley (Cheers) and Marina Sirtis (Star Trek: The Next Generation) in topless scenes. 2001‘s Keir Dullea also appears as Bottoms’ doctor.