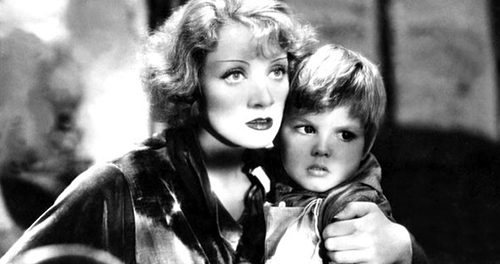 Marlene Dietrich re-teams with director Josef von Sternberg (The Blue Angel) to play a woman-on-the-run in Blonde Venus. After her husband falls ill from radium poisoning, Dietrich performs in a nightclub to make money for his treatment. But when Cary Grant shows up at the club offering a way to make more money faster, Dietrich takes him up on his offer. (Who wouldn’t prostitute themselves to Cary Grant, really?) While the husband (Herbert Marshall) is treated in Germany, Dietrich and her young son (Dickie Moore) move-in with Grant and practically start a new life. But when Marshall returns, learns of the infidelity, and demands custody of their son, Dietrich takes off with the boy. She works any job she can find — washing dishes, farm work, the odd cabaret — to support herself and her son, all while the police close in on her.

I like movies in which the feminine hero is sympathetic without being as pure as an angel. Dietrich’s character clearly makes mistakes, but she’s a victim of circumstance and we’re with her all the way in this movie. Dietrich carries the movie with a naturalistic performance ahead of its time in places. Dickie Moore holds his own in scenes with Dietrich and tugs on our heartstrings without having to try too hard. Grant’s role is small and unremarkable, but an un-credited Hattie McDaniel (Gone with the Wind) is memorable as a kind maid who helps Dietrich in a moment of need.

The film’s conclusion may wrap up the story a little too conveniently for some, but Blonde Venus is a good yarn that pulls viewers into some morally gray areas and asks, ‘What would you do?’ It also has some remarkable sets and wardrobe, and a titillating opening sequence in which Dietrich and a group of other women are swimming in the nude (curses to well-placed foliage). The highlight of the film for me, though, is a bizarre but beguiling musical number called “Hot Voodoo,” in which Dietrich takes the stage in a gorilla suit, surrounded by undulating white natives in blackface.