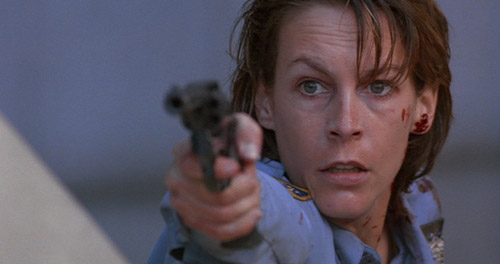 Kathryn Bigelow (The Hurt Locker, Strange Days) co-writes and directs this female cop thriller starring Jamie Lee Curtis. Curtis plays a new cop on the New York streets who shoots a grocery store bandit to death. The film takes a bonkers turn when one of the witnesses hides the bad guy’s gun and starts killing innocent citizens with it. The bullets he uses have Curtis’ character’s name carved on them? Why? Don’t expect Blue Steel to lay out a sensical excuse for the guy — he’s literally just bat-shit crazy, hearing voices in his head, rubbing himself in hooker’s blood, and stalking Curtis everywhere, a la Fatal Attraction.

Blue Steel had me scratching my head in puzzlement a lot. I dig Curtis in an action movie, and I was hoping she and Bigelow were going to serve up something a little more… well, feminist. Instead, Curtis’s character falls all-too-easily in love with the crazy guy (the ever-smarmy Ron Silver) — before she knows who he is, but still. And then she later sleeps with one of her police bosses (Clancy Brown) in a scene that stretches our suspension of disbelief. I feel like certain sequences in the third act were replaced with hastily reshot footage to make the film more formulaic and familiar, but I don’t know it for a fact.

If you can overlook some bizarre turns and a villain with no coherent motivation, Blue Steel‘s not a total wash. There are a few good thriller moments, a moody score by Brad Fiedel, and beautiful night-time, shallow focus cinematography courtesy of Amir Mokri. With Elizabeth Pena, Philip Bosco, Richard Jenkins, and Louise Fletcher.