Katharine Hepburn and Cary Grant give marvelous slapstick performances in Howard Hawks' farcical masterpiece, Bringing Up Baby. This is my favorite screwball comedy of them all. The mismatched characters are forced into couple-hood through their shared adventures trying to recapture Hepburn's lost pet leopard. Matters are complicated when another leopard escapes from the local zoo and the two animals get mixed up. By the time this madcap film ends, Hepburn loses the ass of her dress, Grant gets into granny clothes, and a dinosaur skeleton crumbles to the museum floor. 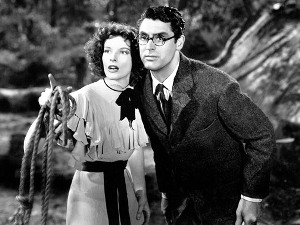 Hepburn is terrifically manic and quick-lipped while Grant exudes comedy in every carefully crafted syllable and gesture.  This is the only kind of romantic comedy I can stomach, the kind where the romance is an inexplicable force drawing two people together and needs no further justification.  Hawks keeps things moving at a rapid pace and gives his two stars long wide shots in which they conquer not only physical comedy, but also the arts of double entendre and witty repartee.

The whole movie is a treat, but my favorite scene is the early one in the restaurant, where Grant accidentally tears the back of Hepburn’s dress and the two must find a way to escape without anyone seeing her bare backside.  Bringing Up Baby is a cinematic treasure that stands the test of time.