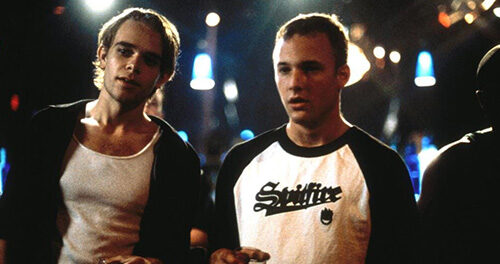 Larry Clark (Kids) directs this adaptation of a true story involving a group of Florida teenagers who conspire to murder a mutual friend. Bobby (Nick Stahl) is the object of everyone’s scorn. He’s a complicated, twisted character in the film. You can feel that he’s under the pressure of his father, and is probably fighting homosexual desire (he watches gay porn while having sex). You might sympathize with the villain a little, but a line is drawn in the sand after he rapes Lisa and Ali (Rachel Miner and Bijou Phillips) and continues a physically and verbally abusive relationship with his ‘best friend’ Marty (Brad Renfro). As Lisa and Marty fall in love and get pregnant, Lisa spearheads an effort to gather together a group to remove Bobby from their lives once and forever.

Like Kids before it, Bully paints a mortifying portrait of American youth culture. Is it an accurate portrayal? God, I hope not, but I’m afraid it might be. Bobby may be the villain of the piece, but there isn’t one likable teen-aged character in the entire film. They are all unemployed, living at home, constantly high on dope or tripping on acid, and most of them have indiscriminate sex at the drop of a hat. They do not appear to be sober when they concoct their murder plans, and most of them aren’t sober when they commit the crime, either. Normally, I don’t like movies that are without a protagonist with whom I can sympathize. But sometimes, these sorts of movies are so fascinatingly grotesque, it’s hard to look away.

The naturalistic cast is led by Nick Stahl, who gives depth to the role of Bobby by not playing it on any obvious level. Brad Renfro gets a few moments to show sorrow and rage, and Rachel Miner is pretty amazing as Lisa. She kinda breaks my heart as a kid suffering under the weight of generational malaise — pretending to be happy she’s pregnant, saying she’s in love when she probably doesn’t even know the meaning of the word, and talking about murder like she’s picking out breakfast cereal. She sells me on the ignorance and danger of her character’s clique. There are times I felt better angels were maybe trying to shout out from deep inside her, offering the tiniest bit of potential humanity in this group of sub-human teenagers.

Clark is unflinching in carrying through with the inevitable outcome. We see the crime happen, and then we see the stupidity that gets everyone arrested — essentially one car wreck after another. We’re a fly on the wall for these horrible proceedings, spying on these kids in their working-class suburban homes and automobiles, listening to their music, and smoking their weed. Bully transports you. And if there’s any noble reason for taking us on this journey, maybe it’s just to remind us how easily children can become monsters.