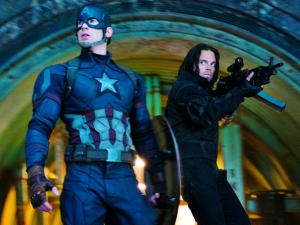 It’s the third Captain America movie, but since most of the Avengers cast is reunited, it feels more like Avengers 3. Not that it matters — these movies all start to feel the same anyway. I like how this one starts, dealing with the aftermath of all the cataclysmic damage the Avengers team has accidentally caused in various countries while battling all their supernatural baddies. It’s a thematic topic very much worth exploring, especially after the last few Batman films made killing masses of people seem like no big thing. It helps to drive the wedge into the team that creates the ‘civil war’. Captain America (Chris Evans) wants the Avengers to remain autonomous, while Iron Man (Robert Downey Jr) wants them to sign a deal granting the United Nations oversight of the superheroes’ actions. So the line is drawn, and half side with Cap and half side with Iron. A slew of supporting characters fill the screen. My favorites were Ant Man (Paul Rudd) and the new Spiderman. Tom Holland (The Impossible) breathes new life to the proceedings as the new Spidey — his first scene with Downey Jr is probably the best in the movie.

All in all, it takes a great deal for me to get excited about any superhero movie these days, but this one is maybe slightly above par. And I have to admit that I’m beginning to enjoy the soap opera nature of these Marvel movies and their drawn-out, interconnected story lines. Differences among characters and plot points from past films all pay off here, and it gives a little emotional heft to this installment. The film drags a bit through the first half and could probably stand to lose about twenty minutes all together (it’s two and one half hours long), but the last half is both action-packed and emotionally character-driven.

What can I say? I expected to nap through most of it, but it kept me awake.

With William Hurt, Don Cheadle, and a bunch of other people investing in their Marvel pension plans.