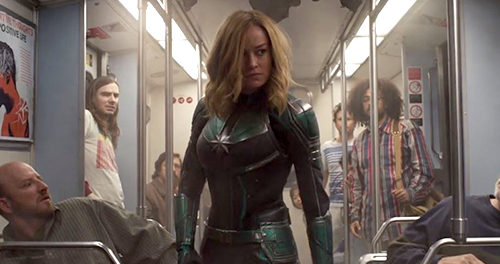 It’s another Marvel movie! And it’s on the high-end of average, like most of their releases. This one is all about a new character, a pilot named Carol Danvers, who becomes the title hero. She doesn’t know who she is or where she came from. She might be an alien. Or she might not. The bad guys might not be bad. The good guys might not be good. And who the fuck is Annette Bening playing? I’d summarize this movie for you if I could. But it jumps around in time, plays with memories, and bunch of other weird shit. I plead the fifth.

What I can say is that the first half hour is boring, kinda like a Star Wars movie with no characters you recognize. But once Carol comes to Earth and meets Samuel L. Jackson’s Nick Fury character, the movie finds its stride. Brie Larson is dealt a somewhat unfortunate hand in this role. She’s playing a character who essentially has amnesia and doesn’t know who she is or what she’s all about for most of the film. It’s not much to build a personality with, so she doesn’t leave an indelible impression. Jackson, on the other hand, has been scene-stealing for decades. I’m sure Larson will find her groove as the sequels come. (Paul Rudd, Chris Hemsworth and some of the other heroes also took a movie or two to get fully warmed up; Robert Downey Jr, of course, never had this problem.)

The cinematography is shockingly dark — as in, I couldn’t even tell if they were using lights most of the time. So much of the movie looked like it was shot in strictly available lighting. In other words, it’s not a very pretty movie. I know cameras are more sensitive to light than ever before, but must we drop the notion of cinematic lighting all together now?

Supporting players Lashana Lynch and Ben Mendelsohn shine in supporting roles. Lynch gives perhaps the movie’s most heartfelt performance as an old friend from Danvers’ past. Mendelsohn brings an adversarial character to life from under heavy prosthetic makeup (not always an easy fete).

To be honest, I was hoping Captain Marvel would be less of a stand-alone origin story and more of a prequel to next month’s big release of Avengers: End Game. But it is not. It is its own movie. And it mostly stands on its merits. If you love this Marvel stuff, you’ll probably enjoy the movie. If you don’t love it, Captain Marvel isn’t going to make you a believer.