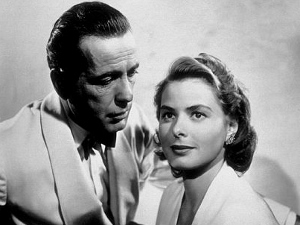 Everybody comes to Rick’s, and everyone loves Casablanca. What’s not to like? Humphrey Bogart turns in a commanding performance as Rick, the reluctant American exile who runs a popular nightclub in North Africa during early World War II. He says he sticks his neck out for no one, but he’s really just a softy who had his heart broken by Ingrid Bergman several years prior. When she pops up in Casablanca with a new flame who just happens to be a leader of the Czech underground, she begs Rick to help smuggle them out of town before the Nazis get them.

The film is a triumph of well-written roles and charismatic performances. Bogart may carry the film, but his supporting cast is equally up to the task. Claude Rains is my favorite, indelible as the wry Captain Renault, a police officer whose neutrality leads to a wonderfully climactic act of allegiance. Some of the banter between Rains and Bogart are among the film’s many highlights:

“What in heaven’s name brought you to Casablanca?”

“My health. I came to Casablanca for the waters.”

“The waters? What waters? We’re in the desert.”

Peter Lorre and Sydney Greenstreet are two of the more caricatured denizens of Casablanca, while Paul Henreid and Conrad Veidt play political adversaries and Dooley Wilson plays the nightclub’s loveable piano player, Sam. Ingrid Bergman spends most of the film in an air of desperation and regret, but she’s damned good at it. When the nightclub patrons try to drown out Nazi singing with a rousing rendition of “La Marseillaise,” Bergman’s worried expression speaks volumes. And I have to agree with Roger Ebert in his DVD commentary of the film: no woman has ever been more beautifully photographed than Ingrid Bergman in Casablanca.

Director Michael Curtiz keeps the film rolling at a pulp matinee pace, languishing just slightly in the more romantic Parisian flashback sequence, while Max Steiner washes the film in a dynamic score that is at turns exciting and romantic. The icing on the cake is Herman Hupfeld’s iconic song, “As Time Goes By,” written eleven years prior to the film, but nonetheless immortalized by it.

Casablanca is a rare film that appeals equally to men and women, young and old. It’s also a gateway film for people just dipping their toes into classic American film. If we had to pick just one movie to represent the Golden Age of Hollywood cinema, let it be this one.