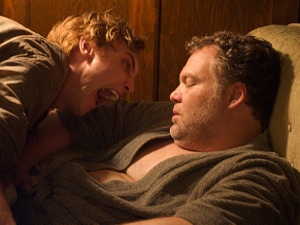 Director Jennifer Lynch (Boxing Helena) explores the relationship between a serial killer (Vincent D’Onofrio) and a young boy he kidnaps and raises to follow in his footsteps. Lynch keeps the film anchored in a dual character study and, despite a modest amount of gore, the most disturbing moments are when the mentor and the protege seem to be connecting. The film hinges on whether the boy (played superbly by Eamon Farren as a teenager) will fulfill his master’s plan. The nature/nurture ‘roots of evil’ subject matter is intriguing to me and the performances here are really solid. My only gripes would be the flashback scene into D’Onofrio’s character’s past and the tacked-on coda sequence. The first tries to answer for a monster in too simplistic a way, and the coda comes off as irrelevant and unnecessary. With Julia Ormond.