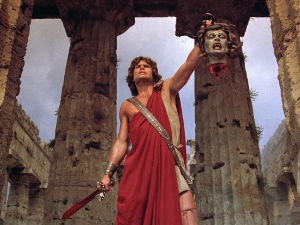 Special effects maestro Ray Harryhausen brings Greek myths to life in Clash of the Titans. The story centers on heroic Perseus, favored son of Zeus, who must accomplish several deadly chores in order to save his beloved Andromeda from being sacrificed to the monstrous Kraken. The film features a wide array of stop-motion animated characters, including Pegasus the winged horse, Bubo the mechanical owl, and the sea-dwelling Kraken itself. This is Harryhausen’s masterpiece. Just look at the scene in Medusa’s chamber, where he’s animating not just the snakes on her head, but the firelight that flickers across her.

Clash is bestowed a solid screenplay and a worthy cast, including handsome Harry Hamlin as Perseus and Laurence Olivier as all-mighty Zeus (a role he was destined to play). Burgess Meredith and Maggie Smith shine in supporting roles, and Laurence Rosenthal enhances everyone’s effort with a large, romantic score. The effects may be too antiquated for today’s kids, but for kids of yesteryear, Clash of the Titans still carries a lot of movie magic.