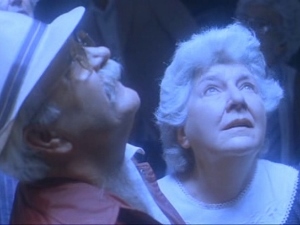 Ron Howard (Splash, A Beautiful Mind) directs this sweet story about a group of nursing home residents who discover a ‘fountain of youth’ in a nearby pool. Turns out, though, that the pool’s power is extra-terrestrial. Soon the old folks become friends with aliens and an interesting proposition is made: Would you like to leave Earth and live forever on an alien planet? Wilford Brimley, Don Ameche, and Hume Cronyn lead the ensemble cast, which also includes Maureen Stapleton, Jack Gilford, Jessica Tandy, and Gwen Verdon. Brian Dennehy plays the lead alien, and Steve Guttenberg plays a regular Joe who ends up caught up in the aliens’ and the senior citizen’s shenanigans.

Cocoon strikes a nice balance between drama and comedy. The sci-fi elements are just layered on top of that, never overwhelming the human story that drives the movie forward. The most touching scenes are between Wilford Brimley and young Barrett Oliver, playing Brimley’s grandson. They were largely improvised by Brimley and Oliver, with Howard and crew using long lenses to keep their distance from the actors. The result is a couple of heartfelt scenes that make us feel like voyeurs getting a glimpse of a very real relationship between grandfather and grandson.

Jack Gilford is memorable as a man who suffers the loss of his wife and Don Ameche took home the Best Supporting Actor Oscar for playing a hopeful playboy. The icing on the cake is James Horner’s score, which incorporates jazz and swing, acoustic guitar, and full-on ecclesiastic orchestra swells when needed.