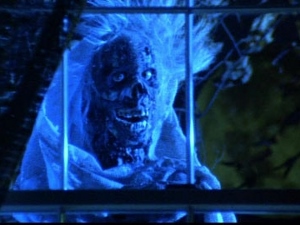 George Romero directs an anthology from Stephen King in this homage to colorful horror comics of the 1950s. All five tales are pretty good. In Father’s Day, a deceased patriarch comes back to life to torment his heirs. Then Stephen King steps in front of the camera, playing a goofy hillbilly who discovers a deadly meteor in The Lonesome Death of Jordy Verill. Leslie Nielsen takes vengeance on Ted Danson in Something to Tide You Over, while beleaguered Hal Holbrook offers his nagging wife (Adrienne Barbeau) to the creature in The Crate. Finally, E.G. Marshall stars as an insect-phobe tormented by cockroaches in They’re Creeping Up On You!  The last two tales are my favorites, thanks largely to the performances of Barbeau and Marshall. Everything is tied together with a bookend story about a young boy who gets even with dear old dad for throwing his comic book away. Romero washes the film in stark, colored lighting and incorporates comic book frames and word bubbles to make it feel like a graphic novel come to life. Creepshow is probably the best horror anthology film ever made — the perfect movie come Halloween time.