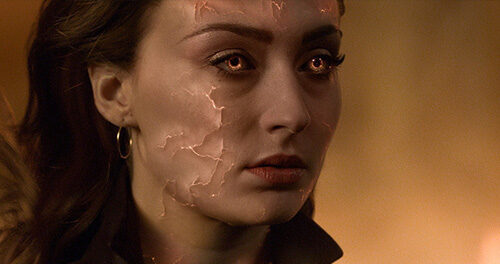 I would call myself a pretty big fan of the X-Men movie franchise. I’ve enjoyed all but a few of them, and regard X2: X-Men United, Days of Future Past, and Logan as exceptional entries. I even enjoyed the more maligned The Last Stand and Apocalypse. But the latest installment in the series, and reportedly the last, is the most disappointing chapter since X-Men Origins: Wolverine.

Dark Phoenix focuses on Jean Grey’s (Game of Thrones‘ Sophie Turner) battle with her growing powers — powers so great they threaten to destroy everyone and everything around her. She becomes angry with Charles Xavier (James McAvoy) for meddling in her head to contain the growing force. After she accidentally kills one of the X-Men, she turns to Magneto (Michael Fassbender) for help. But even he is afraid of her. So in steps a creepy alien character played by Jessica Chastain. Chastain plays the little devil on Grey’s shoulder, working to ease her into villainhood, while Xavier and the other X-Men fight to convince Jean that her place is with them, and that she is not defined by her dangerous abilities.

The story sounds great. Lots of dramatic potential. The cast is tried and true, and I can’t put any of them at fault here. McAvoy, Fassbender, and Turner do good jobs. Jennifer Lawrence, as Mystique, makes the most of her limited screen time, and Nicholas Hoult, as Beast, gets more acting opportunity than he’s ever had in previous X-Men films. But somehow, Dark Phoenix just doesn’t work.

It might be the director. Simon Kinberg has a lot of producing experience, including work on several X-Men movies. But his feature directorial debut lacks a sense of dramatic timing. Dark Phoenix plays like a long trailer instead of a feature narrative. There aren’t any emotional peaks and valleys. Things just happen, without build-up or release. We see tragic things happen, and we feel like we ought to have feelings about them, but the film fails to get us invested. Kinberg also fails to give the film any sense of humor (the movie is a serious downer), and it’s nearly devoid of stylistic or cinematic grace notes. The production design, costume design, and location choices are all lackluster. And Hans Zimmer’s atrocious score might actually be the single biggest culprit for the movie’s pacing issues. Zimmer can be a genius at times, but he’s phoning it in with Dark Phoenix. The music doesn’t feel composed — it’s just long, sustained waves of synth noise that play across scene bridges, wall-to-wall in the film, robbing moments of any individual spirit, and lulling the audience to sleep.

And it could also be franchise fatigue. We’ve seen this Jean Grey storyline play out before, in 2006’s The Last Stand. We also saw what very much felt like the end of the X-Men saga in 2017’s hugely satisfying Logan. If you love the X-Men as much as I do, you might find enough to enjoy to make a watch worth your while. But I suspect casual viewers will be left cold by this bird.