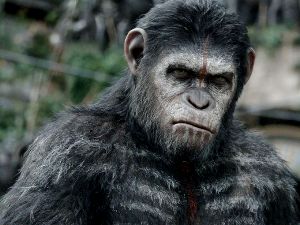 In this sequel from director Matt Reeves (Cloverfield, Let Me In), the virus introduced in the previous film has obliterated more than 99% of the human population worldwide. In San Francisco, there is a small colony of humans focused on repairing a hydroelectric dam in the Red Woods so they can have electricity and possibly reconnect with other survivors. But its in the Red Woods that they come into direct confrontation with Caesar (Andy Serkis) and his tribe of intelligent apes. Many of the apes, including Caesar’s right-hand man Koba (Toby Kebbell), are immediately afraid of the humans. And why not? One of them shoots and injures Koba’s son Ash during their first encounter. But Caesar, having been raised in the previous film by a kindly human, is inclined to hear the humans out when they ask permission to work at their dam in the forest. The bulk of the film is about the precarious relationship between the apes and humans. Caesar and a human named Malcolm (Jason Clarke) are both remarkably determined to maintain peace, but factions on both sides would rather declare war… and boy, does war come.

For me, movies are about being transported — whether it’s to another time and place, or into the dramatic circumstances of a fictional character. Rarely does a movie compellingly transport me in both ways. This one does. The post-apocalyptic wasteland and the apes’ mountainside village are breathtaking. In this day of easily-achieved digital effects, fantastic environments usually feel plastic and phoney to me. But for some reason, these ones return me to the atmospheric magic of Star Wars. Maybe they’re real sets, or maybe they’re hybrids. But they transported me — and I treasure that feeling.

And speaking of visual effects. WOW. If you thought Weta Digital did a bang-up job before, just wait to have your mind blown. I don’t usually like to single out visual effects, because in this day and age, they are usually employed in a tacky fashion — if only to keep the ADD youth from glancing down at their phones. But this movie uses its visual effects to further the story, and more importantly, create believable characters that move you. The visual effects are a wholly integrated part of the film’s mise-en-scene. Not since The Lord of the Rings have they been so key to a film’s success and mastered so extraordinarily. The ape characters in this movie blow Gollum, King Kong, and every other digitally-rendered character ever created right out of the water. With rare exception, every shot of these characters is completely convincing. I honestly began to forget I was looking at computer-generated beings. Avatar may steal a lot of historical thunder where motion-capture animation is concerned, but in my eyes, that film was only a step towards the accomplishment of this one. It’s truly a watershed moment in the evolution of believable, realistic visual effects.

Dawn is anchored by a solid screenplay from Mark Bomback and returning writers Rick Jaffa and Amanda Silver. The story reminds me of Dances with Wolves and District 9 — both stories about characters divided by race or species trying to reach out to one another. Dawn takes many of its dramatic cues from Hamlet, but hey, if you’re going to borrow, at least borrow from the best, right? The human characters aren’t as compelling as the apes, but I think the idea here is to get you to relate with the other side. We the audience are the supporting players in the world of Dawn of the Planet of the Apes, and we’re being asked to identify and have empathy for something other than ourselves. It’s the whole thematic point of the film. And in this age of constant warfare and racial alienation, it’s a vital, poignant point to be making in commercial entertainment. Some may find the allegory a bit on-the-nose, but I found it sincere and heartfelt. Caesar and Malcolm’s desperate efforts to foster peace really moved me. I have to give mad credit to a Hollywood summer flick that can do that anymore.

Kudos to Matt Reeves for a directorial approach I would call more classical than contemporary. I was thankful not to notice any hand-held photography, and while there might be a few digital camera angles and movements, they never took me out of the movie like the video-game execution of the new Hobbit movies does. There is one very obvious 360-degree camera movement in the third act, but I thought it was used for great dramatic effect — it was earned. At other times in this film I felt like Reeves was aiming for imperfection with the visual effects. I won’t say what the last shot in the movie is, but I dare say many other filmmakers would have been tempted to make it perfectly symmetrical in composition. But Reeves keeps it messy, even though it’s (presumably) all digitally rendered. Messy is the key to real, and Reeves uses it to give Dawn of the Planet of the Apes credibility.

Kudos to composer Michael Giacchino for another top-notch soundtrack, too. There’s a good share of bombast, but Giacchino dares to score some big moments with soft music, underlining the fragility of the characters and their objectives instead of the obviousness of literal onscreen action (a simple lesson some composers seem to have forgotten). I’m also thrilled that he pays homage to the original Jerry Goldsmith score at times.

Bottom line: I can’t wait to see this movie again. Rarely do I enjoy Hollywood sizzle flicks as much as this one (I think District 9 was the last summer movie I rated this highly, and that was five years ago.)