Director Sidney Lumet showcases a true story ripped from the headlines, about two amateur bank robbers who started a media sensation that exploded further when the public learned of their unusual circumstances. Al Pacino stars as the master-mind of the heist plan that goes to hell and Charles Durning costars as the police captain who tries to manage the 24-hour siege. What's most remarkable about this story is the robbers' unexpected courtesy toward their hostages and law enforcement, as well as the reason Pacino's character needs the money -- to pay for his lover's sex change. Lumet's unadorned, fly-on-the-wall approach neither sensationalizes nor condescends to any of the material or its characters. Dog Day Afternoon is a mesmerizing mash-up of the gritty and the oddly touching, the darkly comic and the emotionally tense. Frank Pierson took home the Academy Award for his original screenplay, while the film also earned nominations for Best Picture, Director, and Editing (Dede Allen). Pacino was nominated for Best Actor and Chris Sarandon (Fright Night, The Princess Bride) was nominated for his supporting role as Pacino's exasperated boyfriend. With John Cazale and Carol Kane. 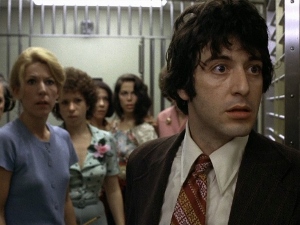