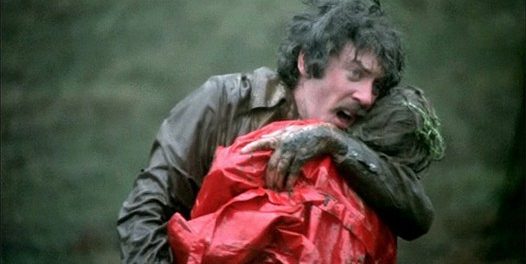 Donald Sutherland and Julie Christie star in Nicolas Roeg’s (Walkabout) film about a couple in Venice trying to get along after the accidental drowning of their young daughter. At lunch one afternoon, the couple meet a pair of old women who claim to possess psychic power. They say their daughter is happy and with them, but then they urge caution — that Sutherland’s life is in danger if they stay in Venice. Christie’s character believes them, but Sutherland’s character – despite having precognition of his own – refuses the call… at his peril.

As with his work in Walkabout, Roeg proves himself a visually striking filmmaker. Don’t Look Now features gorgeous camerawork and poetic use of imagery. It also features compelling, cutting-edge editorial work — particularly during the tragic opening sequence, when Sutherland is looking at photographic slides inside the house while his daughter is playing near the pond outside. The juxtaposition and cross-cutting compress both time and emotional impact. This kind of cross-cutting is also used to make a lovemaking scene between the two stars particularly powerful.

As a would-be thriller, Don’t Look Now is a bit lacking in visceral thrills and could stand to be a little more tightly wound with regards to tension and suspense. But Roeg makes up for it with atmosphere and performance. Few other films showcase Venice so beautifully, particularly in a creepy nighttime setting. And the mature, loving relationship between Christie and Sutherland is one of the more believable and effortlessly engrossing ones I can recall in cinema, especially for a film that’s not exclusively about a romance.

Don’t Look Now is what I’d call an okay story made infinitely more interesting through execution.