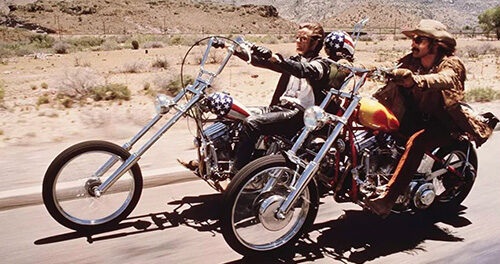 Dennis Hopper co-writes, directs, and stars in this counter-culture cornerstone about two hippies (Hopper and Peter Fonda) who embark on a cross-country motorcycle road trip from Los Angeles to New Orleans, trying to figure out how to live their lives and survive harassment from small-town hicks. Easy Rider is a fairly avant-garde movie for a Hollywood studio to release. It eschews a traditional narrative trajectory and character development for a more ‘tone poem’ approach. It’s got esoteric late night campfire banter and aggressively edited montages — something between an art film and a party movie.

I’m sure the escapist value of the film figures heavily in its appeal, but that’s really not what I connect with. I connected with the Jack Nicholson character and the statement the film makes with its ending. Hopper and Fonda’s characters are blank slates as far as backstory and personality go. But when they meet Nicholson and let him ride with them, he quickly becomes the most talkative and interesting character. In a late night conversation with Hopper, he states the bigots hate the hippies because they know only the hippies are free — free to grow their hair, wear what they want, and live how they want to live. Their jealous resentment manifests in discrimination and even violence.

Easy Rider‘s shocking ending helps secure its place as an important, meaningful film — and no less so 50 years after its release. You might enjoy the journey, the performances, or the free spirit of the film, but for me it’s an anthem movie more than anything else. It’s a political statement — one that serves as a reminder that those who oppress us usually do so out of a desire to repress their own human nature.

With Karen Black and Phil Spector.