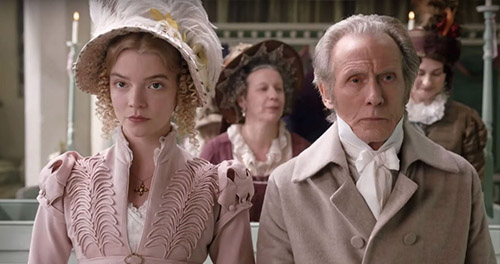 This is the worst adaptation of Jane Austen’s Emma I’ve seen, with Gwyneth Paltrow’s middling 1996 version coming in ahead, and Amy Heckerling’s Clueless easily taking the crown. This newest incarnation is directed by Autumn de Wilde, a first-time feature director with a string of music videos in her filmography. But don’t expect any visual or aural panache on that account. This Emma suffers from a plodding pace and a tonal identity crisis — dressed up like a less pretty Merchant Ivory flick, but haphazardly sprinkled with forced quirkiness and off-kilter performances that bar Austen’s work from affecting any emotional resonance.

I’ve loved some of the cast members in other films, but no one really works in their roles. Bill Nighy is always delightful, but he’s a one-note joke here in the role of Emma’s father. Emma is played by Anya Taylor-Joy (The Witch), who seems to do her best — hitting the right notes in the right places, but still somehow suffering under the weight of the film’s confused style and tone. The father/daughter relationship and the film’s many romantic entanglements all fail to resonate. Not as drama, comedy, or even comedy-drama. De Wilde seems confused about which way to take the film, so it ends up going nowhere.

I waited and waited for Emma to hook me, either with charm, or humor, genuine human emotion, or even some level of beauty — but it never ever happened. The entire cast look like drowned toads in their questionable hair and makeup, and the music is eclectic and as unsure of its purpose as much as the film is. Some of the interior art direction is nice and one of the male actors has a rather fine ass, but beyond that this Emma is a dull and hollow snooze-fest.