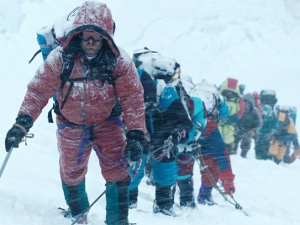 Everest is the true story of a deadly 1996 expedition up Mount Everest in which two climbing parties suffered casualties after a fierce blizzard engulfed the mountain with little warning. The film is more of a dramatic biopic than a sensational survival flick, and while that’s normally a good thing, I do wish Everest were a little more suspenseful or exciting. The ensemble cast is an attribute to the film, with Jason Clarke (Dawn of the Planet of the Apes) headlining as one of the doomed climbers. He’s surrounded with the likes of Josh Brolin, John Hawkes, Jake Gyllenhaal, Emily Watson, and Sam Worthington (Avatar). Robin Wright and Kiera Knightley also appear in thankless ‘worried wife’ roles. The best thing about the movie is its location photography, much of which was captured at Everest itself.