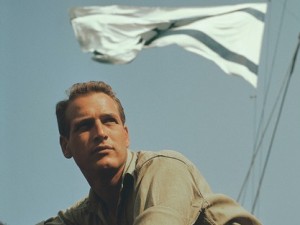 Paul Newman, Eva Marie Saint, and Sal Mineo put their lives on the line to lead hundreds of Jewish refugees into Palestine during the wake of WWII in Otto Preminger’s Exodus. The film has its moments, but for subject matter so ripe with dramatic potential, it’s in desperate need of a solid narrative through-line and more compelling leading characters. Newman is playing a stoic character who’s hard to give a crap about, and Saint is her ever-so-boring self. Only Mineo exhibits anything resembling human emotion during this 3.5 hour epic. There’s a pretty good scene where his character, a Jewish terrorist, recounts his experiences at Auschwitz. Mineo overacts a tad, but it’s a fine performance overall — one that earned him an Oscar nomination. The only other outstanding aspect of the movie is Ernest Gold’s Oscar and Grammy-winning score, which packs far more emotion and drama than the movie deserves.