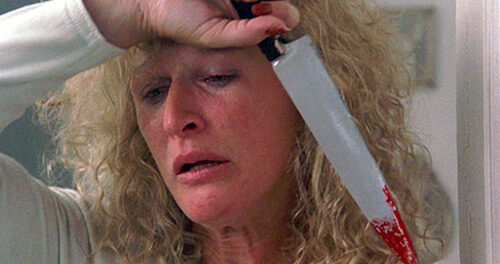 Michael Douglas plays a husband and father who has an affair with a colleague played by Glenn Close. What Douglas thought was a one-night stand turns into a nightmare when Close’s character reveals herself to be emotionally unstable. Constant phone calls turn into stalking. Stalking turns into breaking and entering. After a family pet is killed, Fatal Attraction heads toward a climactic showdown.

Fatal Attraction is most remarkable to me for how it succeeds in making its two leading characters sympathetic, even though they are profoundly flawed. Douglas commits adultery and Close’s character seemingly suffers from mental illness that compels her to do dangerous things. It’s a credit to James Dearden’s screenplay (with an assist from Nicholas Meyer) and the performers that the audience is able to (at least mostly) forgive Douglas’ indiscretion and feel sorry for Close’s potentially murderous character. Without the complex characterizations, Fatal Attraction would still have been a solid thriller thanks primarily to Adrian Lyne’s tight directorial control. The extra human depth sets the film well above the fray.