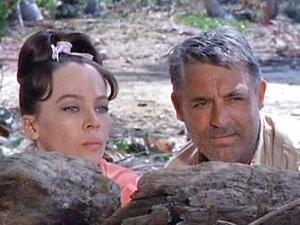 I like the premise of this one. Cary Grant plays a beach bum who relays Japanese radio messages to the military during WWII. His life is a solitary one until a plane crashes on the island, introducing him to a school mistress (Leslie Caron) and seven little girls. As you might imagine, at first he hates this estrogen invasion, but soon comes to find it rather pleasant.

Let’s face it, though. Cary Grant decided to retire 20 years before he died. I wish he would have made the decision at 30 years. I absolutely adore Cary Grant, but the last 10 years gave us nothing but terribly mediocre fare, and this movie is no different. Sure, we get to see Cary play a scruffy drunk, but honestly, it’s a pretty watered-down performance. Why was Cary Grant so dead-set against making any movies that had even the slightest bit of bite or sizzle after WW2? Fortunately, we’ll always have the screwball `40s to remember him by. Father Goose is for Grant completists only.