A profound, yes profound, pitch black satire that has become an anthem for a "generation of men raised by women". From a gender studies perspective, Fight Club speaks to the fragility of masculine identity and the disturbing lengths to which misguided youth will go to feel like they belong, to have identity, to be men. Fight Club is famously reviled for its graphic depiction of violence and nihilistic prophesizing, but under the irreverent comedy and pithy narration lies a frightening truth. Tyler Durden is eloquent about identifying the problem: 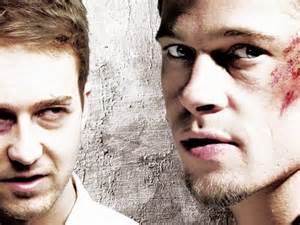 “I see all this potential, and I see squandering. God damn it, an entire generation pumping gas, waiting tables; slaves with white collars. Advertising has us chasing cars and clothes, working jobs we hate so we can buy shit we don’t need. We’re the middle children of history, man. No purpose or place. We have no Great War. No Great Depression. Our Great War’s a spiritual war… our Great Depression is our lives. We’ve all been raised on television to believe that one day we’d all be millionaires, and movie gods, and rock stars.  But we won’t. And we’re slowly learning that fact. And we’re very, very pissed off.” (This is not only a great movie mini-monologue, but a beautiful condensation of Susan Faludi’s Stiffed: The Betrayal of the American Man.)

What scares and offends most critics of Fight Club is what Tyler and his band of Space Monkeys do about this problem. They create a homosocial refuge, shun women and the world, and react from their guts against what they perceive as their oppressor — largely, the consumer culture that seeks to feminize them and send them — shaved, plucked, and moisturized — onto Calvin Klein billboards. The satirical resolution and gleefully malicious tone of the film make Fight Club appear enormously irresponsible. But I see it as more of a cautionary tale about men seeking worth from false measure, and the schizophrenic break that happens when deeply-ingrained social expectations defy our primal nature.

All this, plus it’s just a really cool, fuckin’ movie.

PS: Not a sour note in the creative contributions of the cast and crew. Directed by David Fincher (Se7en, The Social Network); based on the book by Chuck Palahniuk; with Brad Pitt, Edward Norton, and Helena Bonham Carter.