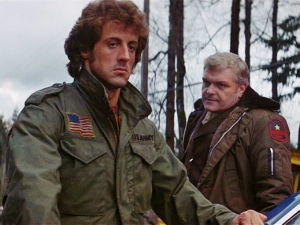 Sylvester Stallone further cemented his action super-star status with this smart, character-driven thriller about a former Green Beret suffering from post-traumatic stress who gets bullied by a small mountain-town sheriff and his deputies. When the soldier finally defends himself, the police force him into an all-out war in the misty mountainside, where his special training helps him evade the law and stay alive.

The 80s were full of action movies that sound like First Blood — and surely, most of them were trying to capitalize on the movie’s success. But few of them are as grounded in character and genuine emotion as this one. The movie, based on a book by David Morrell, opens with Stallone’s character, John Rambo, learning that the only other surviving member of his Vietnam unit has recently died from cancer. Stallone begins the film in a place of great sadness, and refrains from showing anything even remotely super-heroic until law enforcement pushes him so far, we as an audience are more than ready to see him open a can of whoop-ass.

What truly separates First Blood from the pack, though, is the final act. First the film open up visually and viscerally, with Rambo blowing up buildings on his way to enact retribution on the villainous sheriff (a terrific Brian Dennehy). But as soon as he encounters Dennehy’s character, the situation is almost immediately deflated, and the climax of the movie becomes an emotional one, with John Rambo breaking down and crying about losing all of his friends and not feeling at home anywhere. I don’t know many other studio action movies that have such a cathartic climax, so I have to give First Blood high marks for having both balls and heart.

On top of the solid storytelling, Jerry Goldsmith offers an exciting score, and the outdoor scenery (shot in the snowy mountain town of Hope, British Columbia) is truly breathtaking. With Richard Crenna and David Caruso.