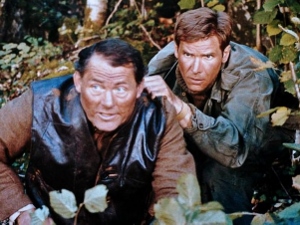 Robert Shaw and Edward Fox reprise the roles originated by Gregory Peck and David Niven in The Guns of Navarone for this matinee adventure sequel. Shaw and Fox are led by Harrison Ford as a U.S. Colonel and joined by Carl Weathers (Rocky) as an arrested army sergeant on the run. Together, the team must complete two separate, secret missions — to kill a traitorous spy (Django‘s Franco Nero) and blow up an important bridge before the Nazis can cross it. Shaw and Ford together may sound powerfully enticing (to me anyway), but character development and grace notes are next to nil, with director Guy Hamilton (a veteran of several James Bond films) keeping a fast pace and breezy tone. Not a bad flick, but I wish it had more bite. Ron Goodwin’s score is a sour note in the mix, constantly overstating the obvious (or “mickey mousing” as they call it). Playing colorful supporting roles are Barbara Bach and Richard Kiel, who appeared together just one year prior in The Spy Who Loved Me.